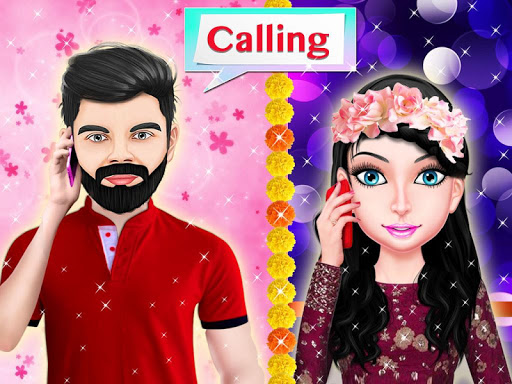 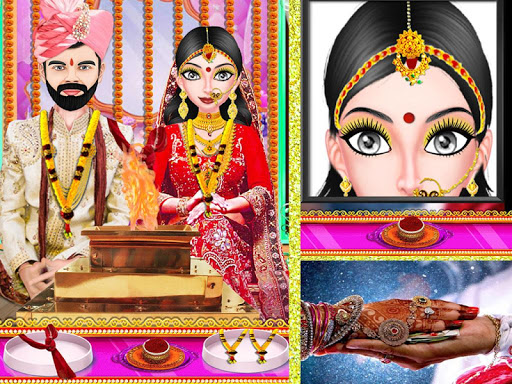 Wedding is Most Important part of Life, So don’t miss the chance to invite all others to enjoy the event and stay in their prayers.
Welcome to our new Game Indian Royal Wedding Beauty -Indian Makeup.It’s defining all information regarding an Indian wedding program like as view of Invitation, Engagement, Hand mehndi, Hand ornament, Leg mehndi,, Makeup, Dress up, , Boy dressup view, Phera,Mandap view, Car and Doli decoration view etc.
Engagement is very popular tradition in India before marriage.Mehndi or Mehendi is a Art and it’s also a tradition in Indian Culture.

CALLING / CHATTING:
In this part we are describing a chatting theme between Groom and Bride. How to commute them before engagement and wedding. How to introduces themselves.

ENGAGEMENT:
According to Indian tradition, rings are exchanged between the groom and bride in this program.

INVITATION CARD:
According to Indian tradition, Groom and Bride give invitation to them relatives and friends to come and join marriage ceremony. .

FACE SPA
Every girl want to become look as a gorgeous in her wedding. So what can she do for looks as special to other persons. She goes to parlor for taking makeup her face.

MEHNDI :
Mehndi is representing to happiness & moment of enjoy. Mehndi is a form of body art from Ancient India, in which decorative designs are created on a person’s body. Applying mehndi to the bride and groom before the wedding is one of the oldest Indian traditions. In every ceremony Indian woman’s makes mehndi in her hands and feet.

MAKEUP
Indian bridal uses 16 items in makeup on himself marriage. These items are known as SolahShringar of the bride.

DRESSUP
In Hindu religion, bride wears red dress in the wedding programe. This dress is know as a lehenga. Bride looks as a princess in the red dress.

Car and DoliDecoration :
After the wedding ceremony, Groom and Bride will go home by personal and special car. So we are introducing the car designs also in this Game.
Add New Levels