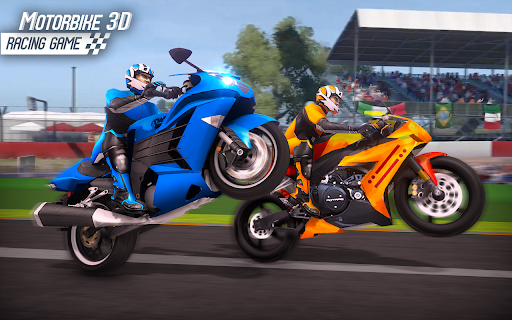 Enter the classic world of 3D bike racing! Become a bike racer, gear up for a real bike driving experience or burn asphalt on the highway in this epic motorcycle simulation game.
MotoVRX is a offline game that boosts your bike driving skills by taking you into a fearless racing smash. Release the crazy bike rider within you, prepare yourself for new motor bike driving games, practice on the real racing track with other street racers, and set the bike race tracks on fire. You can also select your favorite racing bike in a mega bike racing game and enter the classic infinite highway ride among heavy traffic away from the mayhem of city. Hurry up! A thrilling bike racing game with a fearless bike simulator experience awaits you.
Amazing 3D Racing Game Features:
Drive in an xtreme 3D bike racing world. Endeavor the unique eye-catching bike race 3d games features. Choose from the unique variety of 3D racing bike models, customize your sports bike with stickers and paints, and kick into a cool bike simulator world. The motorcycle simulator comes with fully functional rear-view mirrors, smooth racing bike physics, and realistic 3D graphics on all devices. Race into a next level 3D bike racing game real fast!
MotoVRX REAL GAME PLAY
Strike the realistic racing smash with the heavy bike of your choice. Enjoy the ultimate real racing game with genuine detailed environment of the circuit tracks, real roaring bike racing sounds and off-road vibrations as you ride in one of the best racing games. Nitro speed to chase other bike riders, and tricky one wheeling to thrill in a fearless motor bike race make this game the best among other stunt games. Go! Become a king in chasing bike gangsters of new bike simulation game.
COMPETE TO ESTABLISH YOUR RACING CARER:
Be a pro stunt rider at motorbike games. Gear up, build your racing game career in different stages. Become an amateur racer by training and practicing on the circuit track for the furious bike race. Practice more, build up nitro with skilled bike riding and crash the other bike racers in an xtreme motorcycle race premiere league. Remember, the race continues until you reach the finish line!
HIGHWAY RIDE IN BIKE GAME
Want to boost your bike rider skills? Go for an infinite highway bike driving game with no limits to become a pro at bike racing. The realistic 3D highway environment, amidst heavy traffic, away from the mayhem of city allows you to practice for the ultimate racing smash. Challenge the street racer within you.
Bike Racing Game Controls:
We care for you! For your ease, the ultimate bike simulation game possesses super easy controls. If you are playing on your mobile, tilt your phone to move the bike left or right. Tap on the right/left of the screen to accelerate or apply brakes. If you are using gamepad, use head tilt to move right or left in the bike race 3d game. Use these super easy controls to chase your rivals in classic racing games.
MotoVRX Bike Racing Disclaimer:
No Wi-Fi, no worries! Want to play xtreme motor race offline with no limits? No problem! MotoVRX is an epic offline bike riding game. We don’t gather any personal information in this racing game. The information collected by our partners is to enhance your gaming experience. Spend some money to get an add-free version of this motorcycle racing games.
Please feel free to drop your feedback and suggestions for this bike driving game! Have fun!
New Game Mode Highway Ride
Game Play Optimized
IDS= com.motovrx.bike.motorcycle.vr.racing