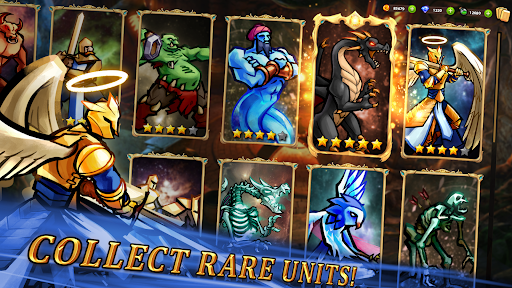 Dungeon Legends is a new game in the world of turn based strategy rpg games where you play with unique heroes.

Welcome to the magic turn based strategy game full of mages, knights and dragons – now you can play adventure games for free! Defeat other players in unforgettable PvP turn based strategy rpg games to reach the top of the Arena. Collect heroes, upgrade units and explore new worlds.

***RAID EPIC DUNGEONS, COLLECT ALL KINGS BOUNTY***
Raid the dungeons, build up a Mage Tower and slay the black dragon!
***COLLECTING CARDS, HEROES, CHEST AND SPELLS***
Find your role in the war and magic. It might help you in battles with dragon and mage and to become a king of the arcane kingdom.
***TURN BASED STRATEGY RPG GAME***
Challenge to build your army and by collecting unique heroes cards your army might become first in the world for free.
***PVP ARENA***
Build a legion with your extremely powerful heroes! Crush other players in pvp arena battles!
***EXPLORE AMAZING CAMPAIGNS***
Fight in dungeons against legendary powerful black dragon and a horde of Minotaurs from the dungeon, skeletons, bloodthirsty vampires and legion of walking dead from the Necropolis, horde warlords. Dungeon Legends Heroes brings you the ultimate dungeons and epic kings bounty from the magic kingdom.
***DEFEND CASTLES AND YOUR MAGIC KINGDOM***
You can play with war minotaur, magic kingdom stronghold, rampart, legion from necropolis or overlord warlords.