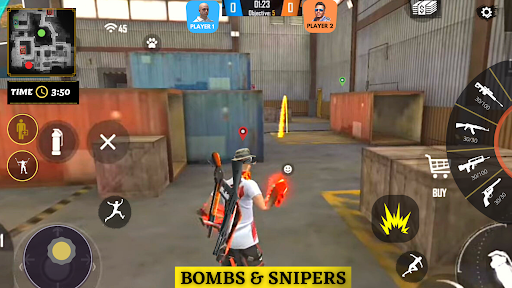 (Free) Squad Fire game is here. Do you love custom room shooting gameplay? We present a new ultimate tps sniper shooter game for you in amazing clash squad environments in complete offline mode. The high quality graphics and catchy 7 minutes gameplay is going to make your fire free skills more thrilling. In this survival free battleground game you can switch weapons and revive again and again to score high. Solo Survivor is a free PVP gun games include a variety of deadly weapons shotguns groza grenade fry-pan pistols & assault rifles of all killing games. You are an expert army commando in this clash squad free game, so take charge of battle royale and come at the front line to complete the 7 minutes survival clash squad in the action packed real game. You will encounter the opponent in commando missions as a specially trained soldier in this pvp encounter game of secret missions. Hurry up get into the cross fire 1vs1 clash squad to show your fire free shooting skills in real game sniper challenge.

Real PVP Encounter Gameplay
The new battle royale game is now available offline in the new unknown map. You can play an intense free shooting game 1 on 1 with your opponent to see who is a better gun shooter among the both of you. This is an action packed challenging and thrilling war game mode. The action-packed clash squad between the free shooter is full of real gun game fun. The encounter commando secret mission battlegrounds is made for 7 minutes survival. Player can achieve the victory after playing for 7 minutes under the best of 1vs1 rule. All you need to just squad up and start playing gun games. Experience something more challenging and thrilling with the new battle field combat. Choose your favourite soldier characters along with your favourite sniper gun from game lobby.

Offline clash Free Sniper Commando Missions
Play best fps offline games with free shooting games in this new action games. Play the ultimate survival shooter game with third-person shooting control in battle royale, stay on the battleground for survival in the killing games, find your enemy, and encounter them in amazing pvp commando secret missions. Along the way in map, you can have redeeming points to revive, go for the cover fire attack while avoiding strike to gain that little edge against the opponent free survivor in this real game. Use multiple combat guns and snipers in this free black ops shooting game. Anti-terrorism clash squad shooter 2021 will urge you to play this fighting game and become the best army commando in all guns game. So enjoy and start the mission impossible game. Gun shooting games offline are front-line strike games. Use your gun shooter skills and destroy all terrorist enemies in free shooting games. Sniper commando game is fun of gun strike based on exciting story-line.

SUPPORT
If you have any problem please feel free to contact us via:
Email: [email protected]
IDS= com.freeshootergames.solosurvivor.pvp.team.shooter.battleroyale