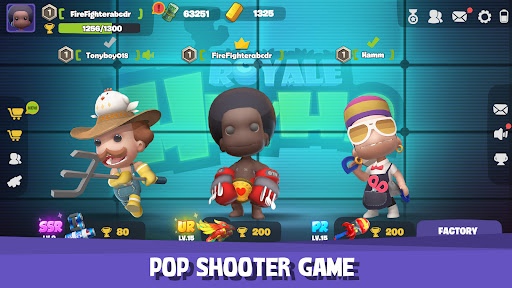 Create your own all-star roster and play multiple game modes for free. Shoot it out with players all over the world in real-time 5-MIN BATTLE ROYALES!

Unlock tons of free guns and super skills to dominate your foes! The wide selection of interesting maps is combined with dynamic weather to make battles unpredictable… Will you be the one to save the world? Customize your character with fashionable costumes and various epic skins. Play in all the different constantly updated games and promotions to win abundant cool rewards!

CASUAL SHOOTER IN THE LATEST STYLE
Want to be one-of-a-kind? Customize the looks of your characters and guns to show off your personal style! Couple the mesmerizing hip-hop moves with current celebrity fashion to transform yourself into the next pop star!
Want cooler guns? Just unlock the myriads of skins! This is not just a battlefield but your personal stage. Strut your stuff and be the star with all eyes on you!
Everybody can be a superstar in HeyHa Royale! The carnival is starting, and the only thing missing is you!

5-MIN BATTLE ROYALES FOR FAST-PACED ACTIONS
3v24 showdown of survival, featuring 8 teams worldwide striving to defeat opponents in 30 seconds! Remember to stay in the Safe Zone and keep up the teamwork in your quest for the ultimate victory.

FREE AND FUN GAME MODES
HeyHa Royale offers unique game modes to every player. From battle royale to causal play, head-to-head, classic game, etc., you’re sure to find something thoroughly enjoyable.
-The BattleRoyale (3v24): Battle royale in which teams compete to defeat opponents in 30 seconds and become the last team standing!
-Energy Clash (3v3): Random energy drops every 10 seconds. The first team to gather 10 Energy units and keep them for 30 seconds wins!
-Cowboy Style (1v8): 8 players compete solo or as duos and score points by defeating other players. The first to 800 points wins! Note that we introduced a super gun—the Cowboy Hat. Get it and go on a killing rampage!
-Classic (3v3): Team up and take on opposing squads. First team to score 20 kills wins the bloody battle!

TONS OF FREE GUNS & SUPER SKILLS
The 30+ guns boast realistic firearm sound effects and can be obtained for free. We also designed unique features for different guns, including flying, tunneling, and duplication for a chaotic free-for-all. Now go rank pushing!