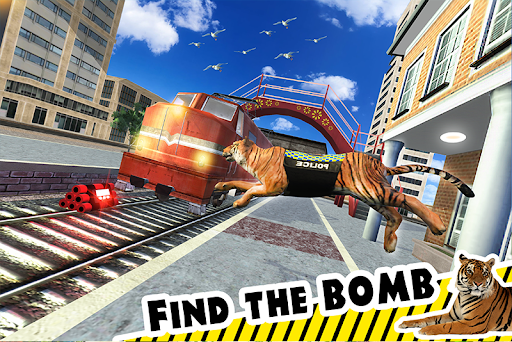 Get ready for new police tiger chase simulator: city crime game where you play as grand city guardian and control the unpleasant activities with the help of tiger patrolling simulator. This game is about US police vs bad robbers. In this game, you are the police pursuit trained tiger (jungle king).

Believe it! There has never been such an incredible police jaguar crime chase simulator. It’s really an unbelievable crazy tiger for those looking to have fun as a virtual dog chase city crime survival. Chase the city thieves who are trying to snatch the luxury purse from the beautiful woman in the street. It’s your duty to chase the criminals and catch him as fast as you can to maintain the city clean.

US Police Tiger city crime survival is a thrilling game for all chase bad boys in the city and catch them with the help of your tiger training techniques. Train your tiger in the police training camp and ready him for city crime defender. Cross all the hurdles to complete the challenging task and eat meat to regenerate your tiger health for the city survival.

As a police chasing tiger your real mission is to chase down the city thieves and defused the bomb bag with the help of bomb squad team while playing tiger US cop city simulator. You need to run as fast as you can and catch them by following the arrow on the city map.
This police tiger simulation has been designed for all ages and having fun sounds with exiting real tiger animations.
Crashing issues are solved
new levels are added
controls bugs are fixed
minor issues are solved
IDS= com.clanified.police.tiger.chase.crime.simulator