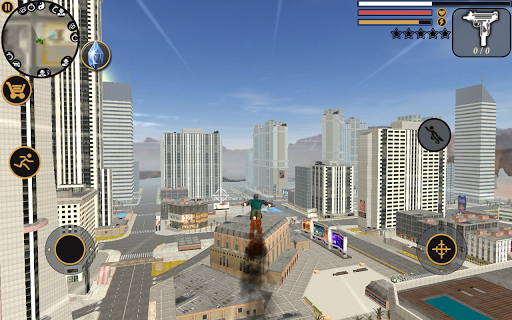 Vegas Crime SImulator 2 is a continuation of the story of the great gangster. Your king of the streets is once again challenged. You have to prove to the criminal streets who is the boss here. You built your underground empire for too long. But betrayals and new people in criminal clans want to take over your business. In a free simulator with an open 3D world, your fighter needs to show his teeth and repulse enemies. You are waiting for an exciting action game with gunfights and chases. Racing at high speeds around the city. A large number of missions clashes with bandits and confrontation with corrupt authorities. Take part in the entry gang. Take control of new territories. Improve your hero and defend the title of the great mafia. Achieve even greater fame in this city. Try your hand at new criminal adventures.

Complete important tasks. The most important are marked with icons on the minimap. Attack protected areas such as a military base and take possession of a large number of weapons for yourself and your brothers. Work for other clans to destroy them from within. Act with your gang. Expand your sphere of influence.

Get daily bonuses. Come into the weight every day and get to the final prize. Receive free crystals several times a day. Collect unplanned resources scattered on a 3D map. You will find a lot of useful things: first-aid kit, cartridges, weapons, body armor.

Vegas Crime SImulator 2 is adapted for mobile devices. Game quality settings, convenient interfaces allow you to play on phones or tablets. Modern 3D graphics, improved lighting and visual effects will allow you to immerse yourself in the game.

You can give your boyfriend superpowers. Make a cool superhero out of your gangster. In the store you can buy:
Super kick – kick with the power of a huge stink.
Super landing is a superhero opportunity. Allows you to land in a mob of bandits with a powerful explosion.
Make the right set for your bandit. Your combo hits will be unique.

In the store for your little man there is a weapon for any purpose. Level up your cool cannons. Even with an ordinary automatic machine, you can effectively resist enemies.

Catomize your hero. A real gangster should look stylish and cool. Dress up your character for different situations. You will be able to collect your own gangster set. Buy bandanas and masks to hide your face. Create threatening outfits that will make your enemies fear you before the fight.

Gather a collection of cool cars in your garage. Steal your favorite cars and purchase unique vehicles in the store. You can buy:
Chopper is a powerful tuned bike. This rare motorcycle has unique performance characteristics for acceleration and handling.
SCI-Fi motorcycle – suitable for your pumped hero. Modern design and powerful engine allow you to drive around the city like a bullet.
Monster truck – a car with increased cross-country ability. It will help you drive everywhere and you will be able to shoot down other cars without damage to yourself.
Sports car – a powerful sports car. Drive the city streets to your satisfaction.

A large modern 3D city will always attract new competitors. You have to be strong dexterous and smart to always be ahead of your enemies. Start playing right now and have fun.
– New content
– New quests
– Performance optimization
– Bug fixes
IDS= com.vegas.crime.sim.two