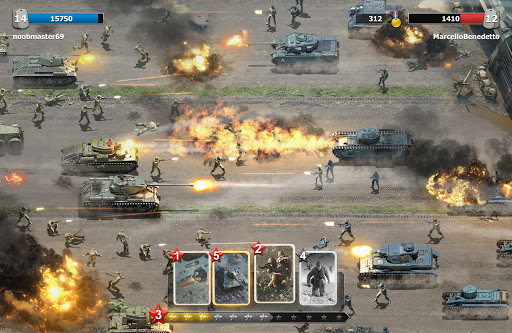 Numerous heavy war machinery and legendary heroes of WW2 are at your disposal in this epic RPG strategy game – from the most influential combat vehicles to devastating carpet bombing and sophisticated chemical warfare.

Build powerful card decks at your choice made up of various types of war equipment from the whole world, be it Japanese Shin Gunto swords or Soviet Katyushas or American M4 Shermans.

Total freedom of operation and variation in strategy is waiting for you.
Earn your medals of honor and climb up the Leaderboard!

FEATURES:
+ A wide range of military equipment: 150+ types of tanks, artillery and infantry from all over the world.
+ Real-life copies of WW2 military equipment reproduced in detail with characteristic shapes and authentic painting.
+ Diverse gameplay: artillery support, assault squads, bombardment, chemical attacks and much more.
+ Lead a huge campaign for liberation of all European countries from the occupation.
+ Build and upgrade your military base that will generate all resources needed for your epic win while you are AFK.
+ Unlock new powerful heroes and construct strong card decks to defeat your opponents in the legendary battles of the WW2 machinery.
+ Awesome HD graphics.
+ Real-time PVP. MySchool - Be the Teacher! Learning Games for Kids 3.3.0