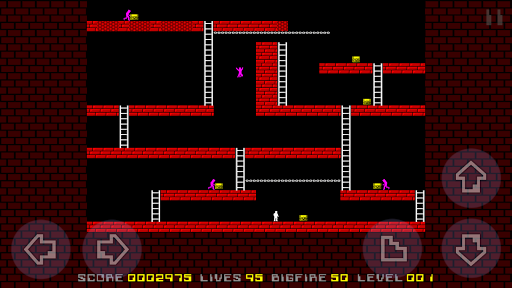 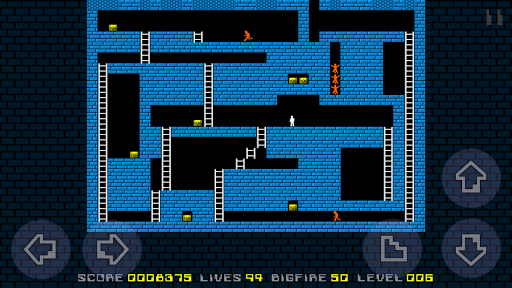 You are a Runner who is trying to steal chests stuffed with gold. The Guards, dead-hearted robots that can catch and kill, are trying to stop you. The trouble is that you are almost unarmed. There is no use shooting, regular weapon doesn’t work on robots. You can’t even jump — the weight of the gold already collected presses you down on the ground.

Even though, you are lucky. In an abandoned laboratory, you have found something like a rock laser, a tricky jackhammer that can punch holes in the brick floor. The thing is strong, but it doesn’t work on robots straight away. However any mechanism can be used as a weapon. You can punch a hole in the floor right in front of the robot and it falls down there. After a while, the hole in the floor closes, and its brittle walls collapse. The robot gets immured and goes to the Devil, if by this time it doesn’t gather its wits to get out of the hole. Don’t celebrate too early – the comrades of the immured call for help and drop the new robot from the air. But you have time to finish all your business — collect all the chests of gold in the room and run up the emerged stairs.

The robot presents no danger, if immured and doesn’t move. You can walk right over its head and it is safe. It becomes perilous only when it gets out of the pit.

Trying to save their belongings, the sly robots can take a chest and waltz with it around the room. Sometimes they throw the chest just by themselves, sometimes the robot must be immured, so that it throws the chest away. And you don’t miss the chance to grab it.

The chests can be hidden so deep that you have to burn through one hole after another to catch the treasure. Likely, the laser you have found has a mode that burns at once three sequential pits in a line. For activation press and hold the shot for a few seconds. Although the number of shots in this mode is limited, it will work in your favor.

Must say right away, it is only brick that the laser burns through. It doesn’t work on concrete or metal stairs. It also doesn’t burn the floor right under the treasure chest. If you still try to burn the concrete, the laser doesn’t work and gives a failure signal. Generally, the laser is a changeable thing and, if not used cleverly, it can easily burn the hole under your feet and immure you to death. Just be careful.

If there are a lot of robots, take a closer look around the room. Maybe there is an empty space somewhere in the room where robots can be driven to without being killed. They make no trouble here, and they can’t call for help. It works great. For example, room number 6 is very difficult to go through, if you don’t block the robots into a cozy, vertical shaft.

Moving around the rooms is standard: the floor, stairs and hanging chains, which can be used to move by running your hands over. You can jump down from the chain, if needed. The laser doesn’t burn the chain too.

There are also gaps in the rooms. These are such tricky brick blocks that look like real ones, but with voids. Both you and the robot can easily fall through these voids. You can’t burn such a block with laser, but you can fall into it. Be careful – once you fall into such a block, the robot may accidentally crash down on your head.

All in all, collecting treasures of others is always hell of a job. But in the end, after going through all the rooms and collecting all the chests, the exhausted Runner walks off into the sunset, happy and wealthy.