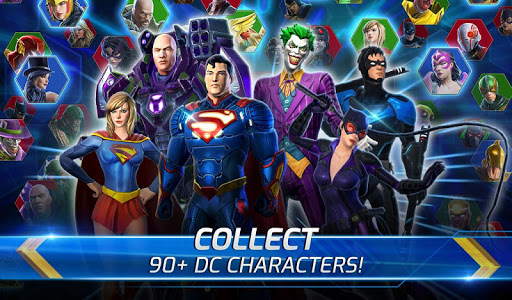 As the shadow of the Blackest Night prophecy falls on every world, sheer willpower alone cannot save the shattered DC Universe. It’s up to you to lead a team of DC’s greatest champions to victory, but know this: the Universe cannot be restored without a strategic mind.

Download now to experience the ultimate strategy RPG, packed with all of your favorite Justice League superheroes and villains. Join Batman, Superman, The Flash, Wonder Woman, The Joker and many more in a battle against Nekron and the Manhunters. Collect and level up your unlikely team of Super Heroes & Super Villains to save the world in epic 4v4 combat!

COLLECT 130+ DC CHARACTERS – EPIC CCG!
• Collect and form teams of Superheroes and Super Villains from across the DC Universe
• Superman and Lex Luthor? Batman and The Joker? Bring together unlikely allies to build your roster and battle against rival teams!
• Construct your own allegiance of the Justice League or build your own Suicide Squad
• Collect new DC characters every month and earn a Legendary hero for free!

FIGHT IN THE ULTIMATE DC RPG
• Immerse yourself in an exciting story mode across iconic DC locales, including Metropolis, Atlantis, Themyscira, STAR Labs, and more
• Unleash Superman’s Heat Vision, Bizarro’s Flame Breath, or Flash’s Speed Force Vortex on wave after wave of undead foes!
• Survive multiple battles by utilizing your whole roster to gain exclusive rewards and characters in R.E.D. Alert Mode
• Compete against other players around the world to demonstrate your superior team-building skills, and climb the ranks in 14 unique Leagues!

Dominate the DC Universe! Download one of the most unique superhero games for free TODAY!

* There are new options to earn and claim free loot!
* Tell friends about your favorite game with the Referral feature!
* Participate in the monthly Raid Boss to earn amazing rewards!
* New exclusive skins every month!
* Watch a video for a free Void Scanner Spin regardless of batteries!
* And many Bug fixes!

Check out the new DC Heroes and Villains!

* Darkseid, the God of Evil, joins the fight!
* Black Flash, Death of the Speed Force, is here!
IDS= com.wb.goog.dc.legends

Save granny. Adventures for kids 1.0.5