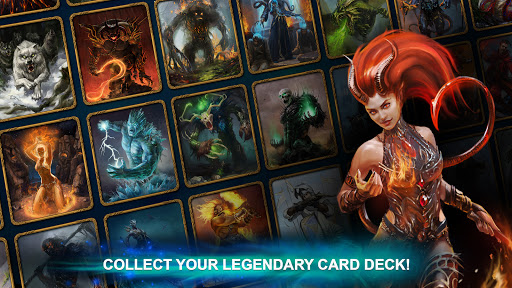 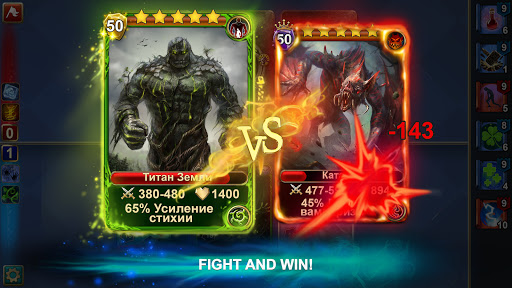 Blood of Titans is a free collectible card game (CCG) with a non-linear fantasy storyline, PVP and PVE battles, clans, tournaments, unique cards and deck builds and also thrilling quests. A horde of magical creatures and an army of humans will clash in an epic battle against the Order of the Burning Hand. Are you ready for the decisive battle?

Previously, this world was ruled by the Titans. Only True Magicians, in whom their blood flows, and you are one of them, can touch their power. It’s time to reveal your gift and take the path of power and glory!

Collect and develop a unique deck of magic cards – exciting quests and breathtaking battles of the fantasy World await you. Join the battle to defend and develop your lands, sending the best warriors to the battlefield: hordes of undead or squads of mercenaries, evil demons or winged beasts. Become the master of 5 elements, and even dragons will obey you!

Features of the World of Blood of the Titans:
⚔ FORM THE DECK WISELY: more than 200 beautiful cards, each of them have unique abilities. Develop and improve the effectiveness of your decks!
⚔ SHARPEN YOUR MAGIC SKILL: send powerful cards reinforced with amulets into battle and become an active participant in the battle – your magic can change the course of the battle!
⚔ REVEAL ALL THE SECRETS OF POWERFUL TITANS: non-linear fantasy storyline of CCG, dozens of campaigns, thousands of quests including PVE battles. Over 50 characters – which one can you trust?
⚔ JOIN EXCITING PVP BATTLES: Mage tournaments, blitz tournaments, secret catacombs, leagues, and faction battles await you. The winner takes it all!
⚔ JOIN A CLAN OR CREATE YOUR OWN: team up with your comrades to exchange experience, develop a clan castle, exchange resources and participate in CLAN WARS!
⚔ JOIN RAIDS: go to a dark dungeon that takes you deep into the heart of this world, you will find the most dangerous opponents and unique rewards. How far can you go?
⚔ BE A WISE MASTER: buildings in the castle not only bring and store resources, but also allow you to enhance the power of collection of your cards. Build, develop and defend your castle.
⚔ PLAY THE GAME EVERY DAY: Get valuable resources and even rare cards for completing achievements, daily tasks and participating in blitz tournaments. Treasures, reward chests are waiting for you!
⚔ DEVELOP A STRATEGY LEADING TO VICTORY: use the right cards with the right abilities at the right time, enlarge the collection of your cards. Crush hordes of enemies on your way!
Do you have the courage and determination to challenge the world of the Blood of the Titans, full of magic and secrets?

Become a member of a new exciting new CCG, fight and become a winner! This game is worth your attention.
IDS= com.sugargames.bot