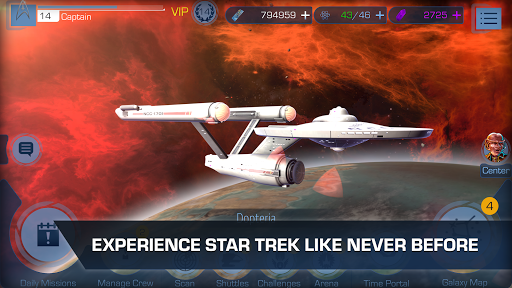 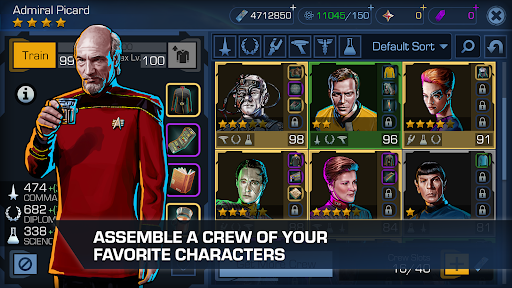 Welcome to Starfleet, Captain! Explore new worlds as you voyage through deep space.

STAR TREK TIMELINES is the ultimate Star Trek™ strategy role-playing game. Set your phasers to stun and join Starfleet on an adventure through space and time to save the galaxy from temporal anomalies. STAR TREK TIMELINES brings together heroes and villains from all of Star Trek history.

The first mobile game to include ships and characters from the new series, Star Trek: Discovery

In STAR TREK TIMELINES you take on the role of a Captain, commanding your first starship. Create your ideal team of classic Star Trek characters in this epic sci-fi strategy RPG. Navigate the galaxy by building and upgrading ships, engaging in intense space battles and completing challenging missions. Join a fleet, explore the unknown, and gather your friends to help you take control of the galaxy!

ASSEMBLE YOUR CREW, with hundreds of characters from all the Star Trek worlds including the Original Series, The Next Generation, Deep Space Nine, Voyager, Enterprise, Picard and Discovery. Each character has their own unique skills and abilities. Play as your favorite character: Spock, Picard, Captain Kirk, Data, Worf, Janeway, Burnham and many more to choose from.

COMMAND ICONIC STARSHIPS, including U.S.S. Enterprise, Voyager, and Shenzhou, the Klingon Bird-of-Prey and Sarcophagus ships, or even the Borg Cube – the iconic spacecraft used by the Borg Collective, and many more.

JOIN A FLEET to squadron up with your friends, compete together in weekend events and collaboratively upgrade Starbases for shared bonuses.

ENGAGE YOUR ENEMIES in stunning 3D spaceship battles with exciting PvE play, or in the PvP Battle Arena where you’ll test your crew’s mettle against the best Captains in the galaxy.

EXPLORE THE GALAXY – boldly go where no one has gone before in your quests to complete your missions and build your ranking. Gain influence among a dozen factions, including the Federation, the Maquis, the Dominion, the Mirror Universe Terran Empire, and the secretive Section 31. Resolve conflicts with other factions through diplomacy and be prepared to go to war when words fail.

CLIMB THE LEADERBOARDS and win rare rewards with special-event missions.

STUNNING 3D GRAPHICS bring the 24th century to life in an immersive and thrilling Star Trek game experience available on smartphones and tablets.

FREQUENT GAME UPDATES to provide you with even more Star Trek characters, starships and special events.

This new version contains:
– updates to various backend tools
– a fix for the issue where no pip notification was shown when Fleet Daily Targets rewards are ready to be claimed
– a fix for currencies not refreshing properly while in the Event Hub
IDS= com.disruptorbeam.StarTrekTimelines