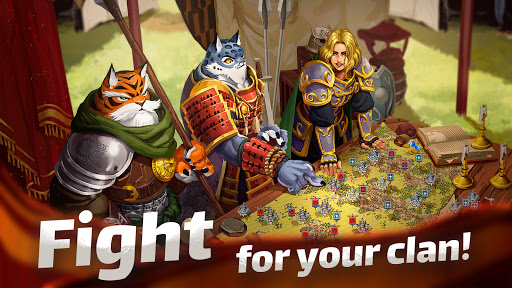 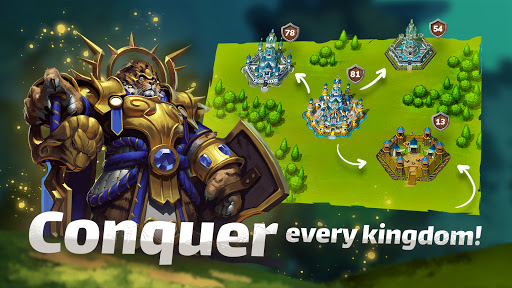 Raise and lead an army. Create a large empire in an infinite world to become the new warlord of the Three Lands in this new multiplayer real-time strategy online game for free!

Create your nation, recruit knights and lords to defend your throne, and let the conquest begin!
You’re the kingdom lord in this real-time strategy game that is all about how you achieve the conquest of the whole world through the invasion and conquering of one nation after the other.

After the death of the great Lord Almaty, his four Lieutenants started the 1,000 kingdom legendary war for the king’s throne… As governor, claim territories in the Three Lands realm in a constantly competitive battlefield and become the commandant of the greatest dynasty ever!

Choose your hero, order your attacks, specialize your armies, expand your kingdom, build an empire, and become a legend in this conquest game! Million Lords is a mobile strategy MMO unlike any other with an emphasis on the art of war and conquering. Prepare yourself for any possible enemy scenario: hostilities, conflicts, betrayals, and alliances. There are no rules in this war. It is all about conquering, invading, and defeating your enemies! Conquer the world using the best military tactics and create your empire. Gather all of your troops and use your shield defense to become the most powerful clan. Peace is no longer an option: Join the battle now and let the conquest begin!

MILLION LORDS – FREE MMO:
– Online multiplayer war: Conquer the world using military tactics!
Team up and plan organized attacks with your clan to climb the leaderboard!
– Original RTS Gameplay
Unique PvP battleground made by an independent studio.
– An epic RPG skill tree
Choose between 10 talents to strengthen your Lord conquest power. Maintain your achievements and glory for your city’s success in an RTS battlefield quest!
– 60 craftable items
To adapt your war strategy in real time in a military MMORPG!

COMPETITIVE SEASON CHALLENGE:
– Every month, we will crown a new player the Lord of the kingdom in Three Lands and it could be you! Stand out and win in a PvP fight campaign!
– Start fresh at the beginning of each battle season: keep your items, war alliances, and ranking after each season!

SPECIALIZE AND IMPROVE YOUR CONQUEST STRATEGY:
– Choose your fighting skills and create your own lord, ready for the combat: your hero, your choice!
– Specialize your epic character and kingdom to face the enemy army. Start conquering cities and defend your territory with an unbreakable shield defense! Plunder resources from your enemy and gather as many troops as possible to wage war against other warlords until you have no more competition and you become the great Lord of Three Lands!
Use your knights and become the king and commander of the greatest empire ever in this real-time strategy game! Adding a well-timed invasion to your tactics will allow you to conquer another nation and add it to your collection of thrones.

REAL-TIME STRATEGY – MULTIPLAYER ONLINE:
– In Million Lords, everything is about city conquest, warfare, and kingdom empowerment! Join your ally heroes and become the most powerful clan of the Three Lands!
– Expand your kingdom with your hero beyond all expectations: the only border is your determination in your RTS MMO mission. Attack and conquer new regions by displaying your strength and tactics in an endless legendary war to increase your dominion!

Don’t spend hours upon hours upgrading buildings and manually-creating soldiers and armies! Download this MMO based on strategy conquest for free!

Clash your kingdom army and compete with anyone, anywhere, and at any time! You will not forget this unique grand strategy war game of conquest: invasion, conquering, defeating, and striking down your foes or let them live: the choice is yours!
General improvements
IDS= com.millionvictories.games.millionlords