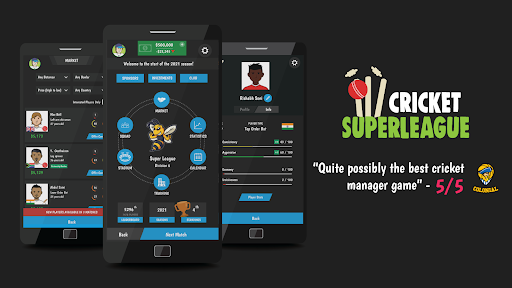 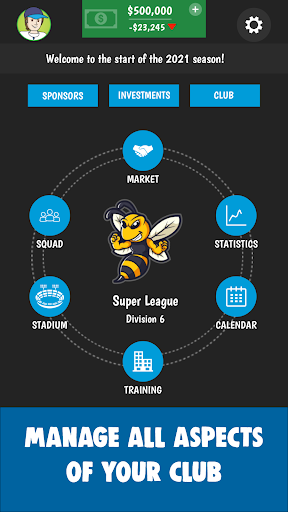 Ever wanted to be an IPL franchise owner? Well, this is your chance! Wicket Cricket Games is back with Super League – A free cricket manager where you take control of the T20 cricket club of your dreams.

BEST-IN-CLASS CRICKET GAME
We’ve made one of the most in-depth cricket manager games out there. We’re avid players of Football Manager and, if you enjoy that, it’s a sure bet you’ll love this game too! You can play this game offline.

RISE UP THROUGH THE DIVISIONS
Your club will start off at the bottom division. Show off your cricket management skills by getting promoted & taking your club to the very top. There are 6 divisions & the game gets progressively harder as you go along!

BUY THE BEST CRICKET PLAYERS
An open market lets you scout and sign the very best players. Try to be smart when negotiating contracts though… Cricketers are always looking for a deal, and you don’t want to be taken for a ride!

MANAGE YOUR FINANCES
Sign sponsorships, investments & be smart about your cricket club’s finances. You won’t be successful without a healthy balance sheet in this game.

EXPAND FACILITIES
As your cricket club grows, it’ll garner more interest. Don’t forget to expand your stadium to seat all the additional fans who’ll want to come to your cricket games!

ABSOLUTELY FREE! WITH 0 ADS!
That’s right, this is the only cricket game of it’s kind with no ads. And it’s free. And you can play it offline. While you can always support us through in app purchases, but you certainly don’t have need to pay to have a fun time.

… We’re won’t bore you by writing much more but, trust us, this cricket game has a whole lot more! Do you have what it takes to be a Cricket Manager?
We heard your feedback! In this update:
– Bribe expensive players to join your team
– Show balls faced during gameplay
– Fix some bugs with statistics
– New types of investments
– Continued improvements to our match engine
– Other bugs fixes & performance improvements
IDS= com.playwicketcricket.superleague