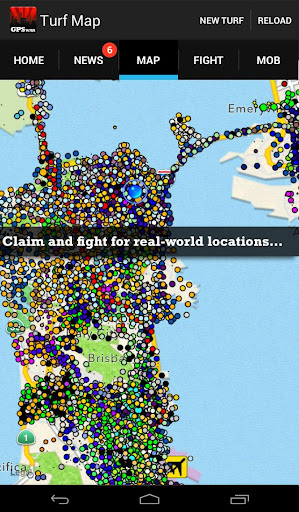 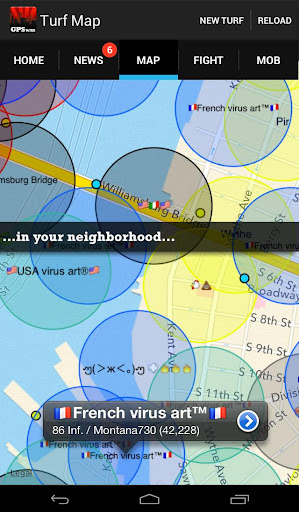 Get in on the real-time GPS action happening in YOUR neighborhood!! Do you have what it takes to be the Capo of your city?

Turf Wars is the massively multiplayer online game where you claim and defend your favorite real-world places from other mobsters. Stake your claim on your neighborhood, your favorite bar or restaurant, your school or workplace – the city is yours for the taking!

Start off as a lowly street punk and rise through the ranks to become the biggest mobster in your area! Run realistic missions, fight local mobsters, seize territory, and deal with the cops to gain more influence and take over your city.

FEATURES:
– Control REAL territory in your city and around the world!
– Build and defend your turf using dozens of realistic weapons and upgrades.
– Capture other player’s turf and make it your OWN!
– Make other players to pay you protection money for their turf’s “safety”
– Send messages to your friends, enemies, and mob members.
– Deal with local law enforcement as you grow your empire
– Invite your friends to build the most powerful mob in your city!
– View worldwide and local high rollers
– Free updates!
– Fight and take over other players’ turf for your chance to become the Capo of your city!

IMPORTANT:
Your device must be running Android 4.03 (Ice Cream Sandwich) or higher and be connected to the Internet to play. For best results, Location Services should be enabled on your device.
Improved location handling!
Bug fixes & Performance Enhancements!