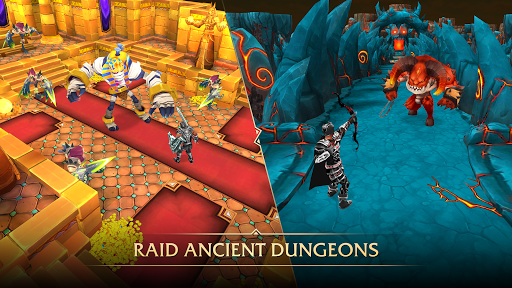 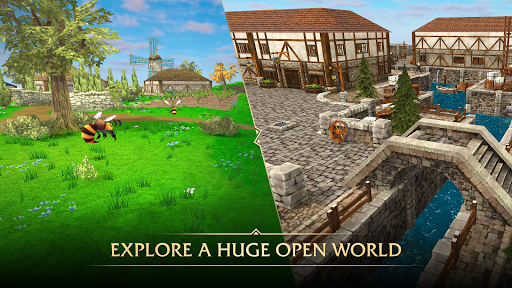 Play as the lone adventurer seeking glory through individual challenges, or band together with other heroes to leave your mark on this MMORPG game. Raid dungeons, compete in huge guild wars, battle epic dragon bosses, and defeat other players in one-on-one combat.

Supply your allies with the best weapons and armor or use them to achieve heroic feats in both PvE and PvP. Ancients Reborn has something for every fantasy MMORPG fan.

The game aims to bring back some nostalgia for what a 3D MMO RPG used to be. With PVE (Player vs Enemy), Quests and Optional PVP (Player vs Player), there’s plenty of entertaining things to do!

UNIQUE WORKER SYSTEM
Progress your character by using the unique worker system – hire a farmer to mine ore or catch fish for you while you’re offline. Easily remain competitive in this MMORPG game without the need to be online 24/7! It’s the ideal MMO RPG for playing on the go, and a reminder of the old-school classic RPGs we all loved to play.

DEFEAT EPIC DRAGON BOSSES
Explore the huge MMO RPG open world and underground dungeons – with complete freedom and no limits to what you can access (assuming you manage to survive the aggressive creatures while you’re trying to get there!). Welcome to the next best MMORPG!

CHOOSE YOUR OWN PATH
Customize your characters and equip them with equipment and weapons to further enhance the look of your character and make them stronger.

Compete on the MMORPG leaderboards to become a specialist or battle players in PvP. Enjoy the social aspects of the large open world with large underground dungeons to explore with lots of rare treasures to find.

MASTER YOUR SKILLS
From combat skills and equipment crafting to cooking and mining, there are a huge range of character skills you can level up. Whether you want to make money, fight, roleplay or support your guild mates, mastering your skills will make you a legend in the fantasy MMORPG open world of Ancients Reborn.

NOT A PAY-TO-WIN GAME
Unlike the majority of “free rpg games” that are pay to win and survive games, Ancients Reborn focuses more on the time you invest, rather than forcing you to buy items. Meaning there is no pressure to spend money as the items don’t give you an advantage over others making it a truly free MMORPG game.

EXCITING PVP & PVE CONTENT
Raid tombs, search crypts and battle fearsome dragon bosses across the world. Become a dragon hunter or a humble merchant, you can carve out your own destiny in this fantasy MMO RPG world. If PvE is your thing, a whole world of adventures, quests, battles and fun awaits.

For bloodthirsty MMORPG players who like PvP, there are lots of areas to fight other players or enter the duel arena for some old school one-on-one combat. Our MMO RPG is the ultimate test of a warrior’s strength!

LEADERBOARDS & COMPETITIONS
Compete on the MMO Leaderboards to become a specialist in a unique skill, or battle players in PvP adventures. Enjoy the social aspects of the large MMORPG open world with fantasy dungeons and epic bosses.

1.2.26:
– Fixed an issue where a Player/NPC could stop listening to messages from the server under certain conditions

Join us on Discord!
https://discord.gg/CdzJp3B