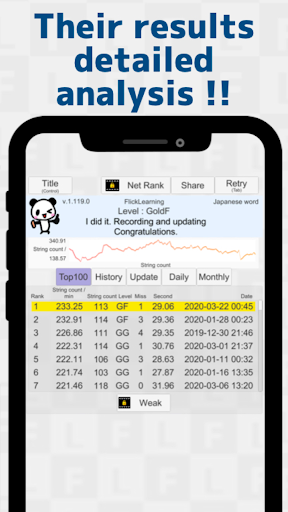 It has designed the other application so that it can be fast flick input to the reference.
Japanese, English, supports a number.
Android, tablet, iPhone, iPad compatible.

We can compete with everyone and the speed and the number of characters in progress in the net ranking in the daily, monthly.
Updated as the day-to-day growth is seen record, daily record, also displays such as the Top100 rankings.
… is a change in the movement of the panda depending on the results of operations
Flick input will progress a game.
There is also a training app aims to speed up in earnest.
Not curve flicks only, or in response to the turn flick of Japanese flick the fastest input method
It is.
Also 2020 is an application that you want to recommend.

【rule】
The first time will end is measured at 60 seconds.
Such as when it fails in the middle, you Yes as soon as possible to retry.
When you enter the first character, and start the measurement.

[Various word]
Japanese
English
The numbers
Spend it on the inner (stay home, is dense) word

[2 types of results screen]
Net rankings
Everyone competes on the net.
And individuals result rankings
It is a score ranking in the terminal.

For more information on each of the individual result screen is as follows.

◆ update record
Only the results when you update the record will be recorded.
It has become to a page that the process of growth is seen.

◆ the entire recording
Displays the record, such as a word Another type number.

[App purchase]
In this app, banner are provided on each page are available to continue billing advertising, the video ads for using the specific function
It will be hidden.

◆ About automatic continuation billing
-App billing will be charged via a Google account.
– stopping the changes and automatic updating of the registered content, please support from the subscription screen of GooglePlay after purchase.

-App billing will be automatically updated. If more than 24 hours ago the end of your subscription period, you can stop the automatic update.
And procedures of in-app billing update is done during the period from 24 hours before the registration period until the end period.

[Other]
Flick learning is provided by Kajinet.
Correct around the message on the result screen