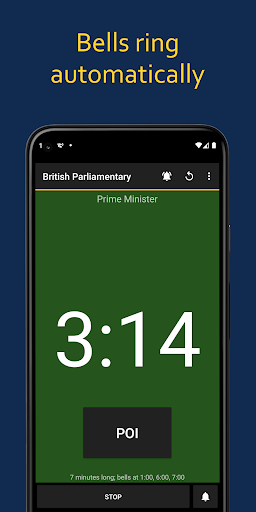 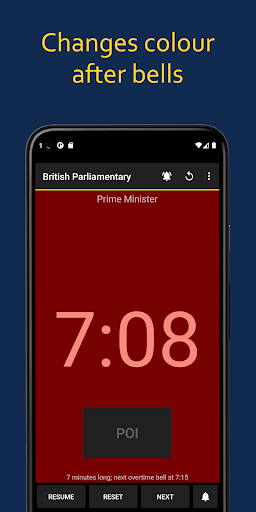 Let Debatekeeper take the hassle out of timekeeping! It will sound bells automatically at the right times, or it can vibrate and/or flash your screen as quieter cues, allowing you to focus your attention on the debate.

Debatekeeper is also highly configurable with things like overtime bells and the preparation timer.

(Debatekeeper does not support the American policy, public forum or Lincoln-Douglas styles, because it doesn’t support prep time between speeches distributed at teams’ election, sorry.)

Advice for adjudicators: It can pay to make sure your debaters (a) know what the bell sounds like, so they don’t think you just got a text message and (b) can hear the bell. It’s normally loud enough in classrooms, but not lecture theatres; in those rooms you can use the vibrate/flash screen functions to remind you to clap.
New in version 1.3: Debate styles now downloaded from online repository; Multilingual debate formats (thanks to Frank); Formats now stored in Android-provided location; Interface translated into German, French, Spanish; New icon (thanks to Alberto); Imports can now be initiated from inside app; Other usability improvements, fixes and updates for Android 10
IDS= net.czlee.debatekeeper